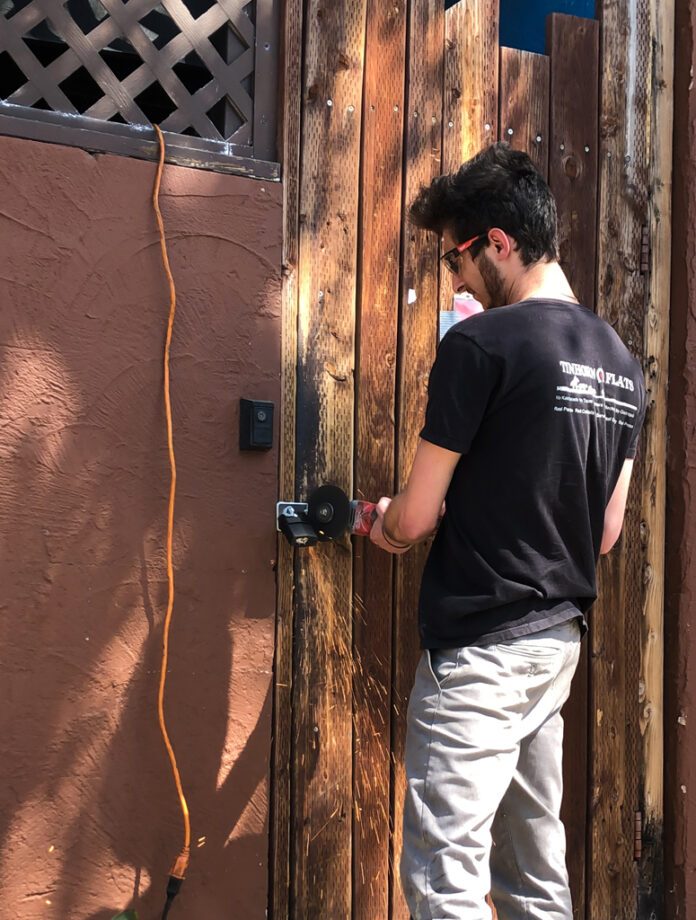 The 20-year-old son of the Tinhorn Flats Saloon and Grill owner was arrested Thursday night after removing a city-placed lock from the restaurant’s doors and welcoming patrons inside.
The arrest came just a day after Lucas Lepejian, son of owner Baret Lepejian, sawed off the latch to a crowd of cheering supporters. The restaurant, which has operated without its health and conditional use permits for weeks, was “red-tagged” — or declared unsafe and thereby not legally accessible — on Wednesday. On Thursday, Tinhorn Flats also reported it had removed boards the city had placed to block its doors.

Lucas Lepejian was released from police custody a few hours after being arrested during a traffic stop at roughly 7:45 p.m on suspicion of violating a court order, according to Sgt. Derek Green of the Burbank Police Department. Green added that the North Hollywood resident was given a citation to appear in court at a later date, which according to booking records did not appear to have been determined as of Friday.
Tinhorn Flats’ red tag stemmed from a number of local and state code violations, mostly relating to the restaurant’s use of generators after the city of Burbank switched off its electricity last month. The generators and the use of electrical breakers as switches, city workers told Tinhorn Flats, posed a fire hazard.
Lucas Lepejian has argued that the violations and the padlocks were unfair because it was the city that had turned off the restaurant’s power. A county judge gave the city permission to do so to enforce a temporary restraining order that bars Tinhorn Flats from operating until it recovers the required health and conditional use permits.
Lucas Lepejian initially told patrons not to enter the restaurant on Wednesday, but later invited them in after he restarted the generators.
“I was definitely nervous [about arrests], but I had to do what needed to be done,” he told the Leader. He added that the decision to remove the lock again was made by him, his sister and his father, who lives in Thailand.
The next day, Lucas Lepejian was arrested, something Baret said was surprising.
“I just didn’t think it was going to go down like this,” he told the Leader by phone. “That’s really wrong.”
The restaurant’s permits were revoked after Tinhorn Flats reopened its outdoor patio during a period when health orders banned in-person dining. The city has sought to bring the eatery into compliance, but has faced difficulty in doing so.
A court hearing is scheduled for April 9, when a judge will likely issue a preliminary injunction and fines against Tinhorn Flats.
Police Chief Scott LaChasse said in a news release shortly before the arrest that “the Burbank Police Department vehemently condemns the actions of Tinhorn Flats and their persistent unlawful behavior,” but added, “sharing our plan prior to implementation could endanger lives.”
Baret Lepejian said he talks with Lucas about their every move and “would never force my son to do anything he didn’t want to do.” But despite his surprise that Lucas was arrested, he said he’s not giving up.
“I’m really tired of it. My kids are at the end of it, too. They want this thing over,” Baret Lepejian said. “And then they pull this arrest out of nowhere.”
Pressure has been mounting for the city and the BPD to bring Tinhorn Flats into compliance, though Burbank officials’ enforcement capabilities are limited by what a judge allows. But many residents expressed frustration after it appeared on Wednesday that the BPD would make no arrests despite its ability to do so. In a news release Wednesday, city spokeswoman Simone McFlarland said police could detain those who cut the lock or entered the building for refusing to leave.
On Wednesday, officers temporarily blocked a small portion of North Naomi Street, where dozens of Tinhorn Flats supporters and anti-mask protesters had gathered. They cheered on Lucas Lepejian as he removed the lock to the restaurant’s patio door, shouting “Freedom!” as he kicked it open.
The group also appeared to vacillate between lauding the BPD and decrying them for their presence, saying it was a waste of police resources.
But while Michael Albanese, BPD deputy chief, said that option was on the table, he emphasized that he didn’t “want the police to be the story.”
“I’m taking it minute by minute, and I want to be smart about what we’re going to do so we don’t escalate the situation,” he said, standing across the street from the restaurant on Wednesday. “It’s analogous to a demonstration where folks are violating some laws but we have them contained, and you have to ask yourself, ‘Is it prudent to make an arrest or just contain and then monitor?’”