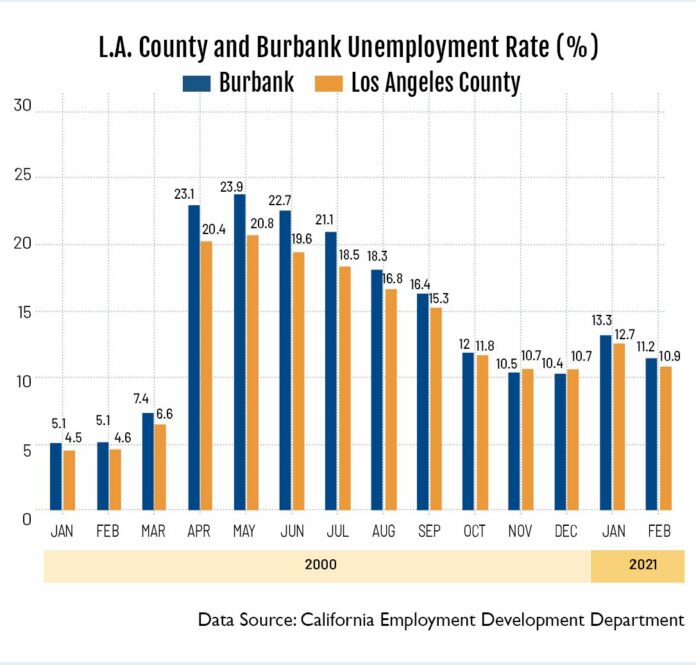 Hundreds of local residents returned to work in February following the lifting of statewide coronavirus restrictions, reversing a steep increase in unemployment reported at the beginning of the year.
The Burbank unemployment rate fell from 13.3% in January to 11.2% in February, according to preliminary data from the state Employment Development Department. The drop reversed some of the recent increases in the city’s unemployment rate, which was 10.4% in December.

The decrease likely reflects Gov. Gavin Newsom’s lifting of restrictions in state regions whose intensive care units were overburdened. His lifting of the stay-at-home order in late January, which allowed in-person dining to resume outdoors and loosened capacity limits for other businesses, accompanied falling COVID-19 hospitalizations and mounting political pressure, including a recall campaign.
About 52,400 Burbank residents reported working in February, up from 49,200 in January. The number of unemployed residents also fell from 7,600 to 6,600, while the city’s labor force swelled by about 2,200 people.
In February 2020, Burbank’s unemployment rate was 5.1%, less than half the figure it was a year later, representing about 3,100 unemployed workers.
Los Angeles County saw a similar decrease in its unemployment rate, from 12.7% in January to 10.9% in February. The county’s rate has historically been lower than Burbank’s.
The decrease in L.A. County’s unemployment rate represented a drop in its number of unemployed workers, from about 625,900 residents to 556,900.
California saw a less dramatic decrease, from 9% in January to 8.5% in February. Most of the job gains were in the “leisure and hospitality” industry, which includes hotels and restaurants. Education and health services also saw increases in employment, while the information and government sector reported losses.
The EDD’s data was not seasonally adjusted, meaning it did not compensate for changes in the job market attributable to holidays and other regular periods.