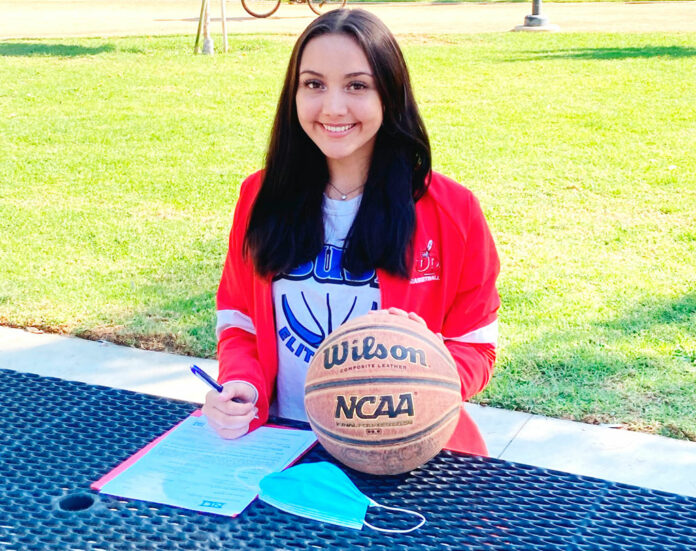 Faith Boulanger had an impressive 2019-20 campaign with the John Burroughs High School varsity girls’ basketball team, and the senior hopes to continue that success at the collegiate level after officially signing a national letter of intent recently.
The senior standout will play basketball for the Cal State San Bernardino Coyotes, who compete in NCAA Division II.
“Faith has had a tremendous positive impact on our program, both on and off the court,” said JBHS girls’ basketball coach Victoria Oganyan. “She has played various positions for us and contributed in multiple categories to help lead our team be successful. Her work ethic, commitment, unselfishness, leadership and high character have helped build on our program culture. We are so proud of her accomplishments thus far and are excited for her next opportunity both academically and athletically.”

Boulanger was one of the best players in the area and led the Indians in nearly every statistic last year, averaging 14.5 points, 8.2 rebounds, 2.4 blocks and 2.1 assists per game. She was named the co-player of the year in the Pacific League and helped Burroughs finish the season with an overall record of 28-5. Boulanger was also the lone Indian to earn a place on the All-CIF Division 2A first team.
The Indians finished second in the league standings and earned a No. 4 seed in the CIF Southern Section Division 2A playoffs. Their remarkable run came to an end in the semifinals when they fell to No. 1-seeded San Clemente. Burroughs clinched a CIF State Division III playoff berth as the No. 2 seed but was ousted in the first round by No. 15 Westchester of Los Angeles.