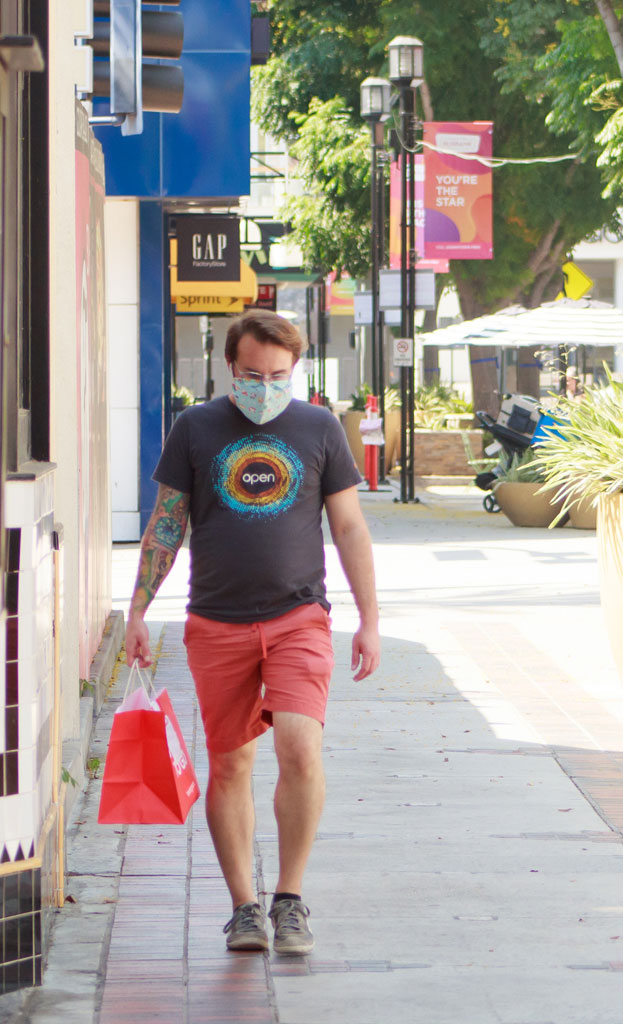 Following a recent decision by the Burbank City Council, face covering requirements are now enforced with a fine.
The Los Angeles County Department of Public Health has released guidance for the use of cloth face coverings to help slow the spread of the COVID-19 virus. The Centers for Disease Control and Prevention has also affirmed that cloth face coverings are a critical tool in the fight against COVID-19, and that face coverings could reduce the spread of the disease, particularly when used universally within communities.
Since the emergence of COVID-19, according to the city, Burbank and its police department have sought to gain compliance with face covering requirements with an emphasis on education.

To help remedy this situation, the city of Burbank has entered into an agreement with Willdan Engineering to have primary responsibility for the issuance of administrative citations with accompanying fines for those who still do not wear a face covering where required.
The city of Hermosa Beach has contracted Willdan to assist police in enforcing face covering requirements since August.
The City Council agreed to contract the role out to an outside administrator after the BPD and its union expressed concerns that police did not have enough resources to oversee enforcement. City staff members have also stated on multiple occasions that the goal is to gain voluntarily compliance, giving a citation only if it cannot be gained.
Burbank police will assume a support role and respond to calls related to administrative face covering violations only when circumstances dictate the need for a police presence, or when it is suspected that a crime has been committed.
The fine schedule is $100 for a first citation, $200 for a second citation and $500 for any subsequent citations issued for violations of the same ordinance within a 12-month period.
Face-covering enforcement began on Friday, and focuses on areas receiving the majority of complaints, such as the Chandler Bikeway, downtown Burbank and Magnolia Park. For now, according to Green, enforcement will be focused only on those areas.
Face-covering requirements implemented by the Los Angeles County do apply in Burbank. In addition, and pursuant to the authority vested in the Director of Emergency Services under Burbank Municipal Code Section 5-2-106, the following, more restrictive rules and regulations have been instituted specific to and within the city of Burbank concerning the wearing of face coverings in certain places:
Face coverings, which cover the mouth and nose, shall be worn under the following conditions:
A. Persons who are outside on San Fernando Boulevard between Angeleno Avenue and Magnolia Boulevard except when seated at an outdoor dining table and they are eating or drinking;
B. Persons queuing in a line outdoors whether on public or private property; regardless if with members of their own household;
C. Persons on Chandler Bikeway while stopped at any intersection whether a pedestrian or cyclist;
D. Persons on Chandler Bikeway or in a city park, including hiking trails, who may be in contact with or walking near or past others who are non-household members; meaning a face covering must be visible and ready to be immediately put on whenever a pedestrian approaches within 10 feet of a non-household member;
E. Persons patronizing public transit, including waiting or sitting at a bus stop or shelter.
All citizens are encouraged to wear face coverings when in public or in close proximity of others and to obey face covering requirements.