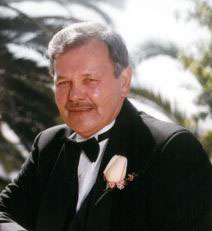 It is with heavy hearts that we announce the passing of our beloved husband, father, grandfather and brother George Fredrick Christophersen, 84, of Burbank on June 3 of natural causes.

George was born in Brooklyn, New York, on April 24, 1936. He was the second of four brothers born to Mildred and Finn Christophersen. George graduated from Boys High School in Brooklyn. He then served in the National Guard for six years.

On May 27, 1961, George married Rosaria Lucia Caminiti, “Lucy,” at Our Lady of Lourdes Church in West Islip, New York. George and Lucy were married for 59 years and had two children, Lynne and Greg. The family settled into their home in Bayshore, New York, for several years before moving to Burbank in 1971.

George worked for 38 years as a painter at the Anheuser-Busch company in Reseda before retiring in 2003. After retirement George and Lucy took several cruises and road trips to points of interest in the United States, Canada and Mexico.

George coached Little League baseball for many years and enjoyed gardening, oil painting, golf and playing slots at the casino. He donated to many charities and was always lending a helping hand to the homeless in the area.

George will always be remembered for his quick wit and sense of humor. He had a joke for every occasion and enjoyed making others laugh.

A funeral service in his honor was held Friday at Valley Funeral Home in Burbank (2121 W. Burbank Blvd. 91506).

In lieu of flowers, the family has asked to please make a donation to the charity of your choice in George’s name. The family also wishes to thank everyone for the outpouring of love and support during this most difficult time.