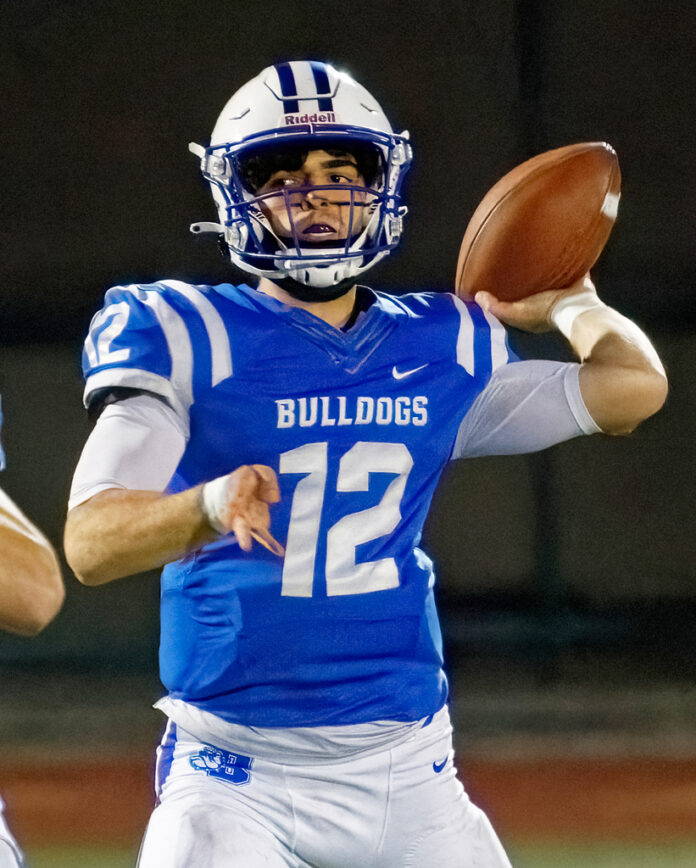 Nearly 18 months since Crescenta Valley High School football won the 2019 CIF Southern Section championship, the Falcons notched their first victory of the pandemic-altered spring 2021 season, beating Burbank High School, 13-6, on the road.
The victory evened CV’s record at 1-1 in both overall and Pacific League play. Burbank fell to 0-3 and 0-2 in the Pacific League.
CV held the Bulldogs scoreless after the game’s opening drive and enjoyed fantastic second-half performances from star running back/linebacker Sebastian DeLeon and quarterback Brendon Pehar after some trademark in-game adjustments from head coach Hudson Gossard. A week after they struggled with turnovers during their loss to Pasadena’s Muir High School in the Rose Bowl, the Falcons did not allow a single takeaway.
“I’m not gonna lie, it feels awesome. It really does,” Gossard said after his first win in 491 days.

“I know how much these kids work, they work their butts off… We knew what we were doing a little bit better coming into this game, we knew the physical and mental part it takes, and the guys did a great job preparing.”
CV’s defensive front helped turn the tide of the game, limiting the Bulldogs’ running backs to just 23 rushing yards after halftime and pressuring Burbank quarterback Aram Araradian enough to record four sacks, several more QB hurries and force a game-sealing interception late in the fourth quarter. Araradian finished with 11 completions on 20 attempts for 74 yards and the one interception.
“We were just trying to do a better job on the edges of keeping [Araradian] contained, and we had some quicker guys on the ends this week as defensive ends which allowed them to then get pressure on him a little bit faster,” Gossard said.
April 2 also marked the first Pacific League game Burbank had hosted since 2019, and the school welcomed a handful of socially distanced, masked fans of both teams to its bleachers while others watched from behind the chain-link fence on the north side of the field along Glenoaks Boulevard. At first, the Bulldogs gave the home crowd plenty to cheer about.
Burbank head coach Adam Colman, who usually favors a pass-heavy attack with Araradian and star receiver Brandon Pena, instead leaned on his running game for the opening drive of the first quarter. It worked, catching CV off guard as the Bulldogs marched 78 yards — all on the ground — to the end zone. Running back Brayon Crawford had five carries for 38 yards on the drive while fellow running back Dylan Robinson had a 16-yard run for the score to take an early 6-0 lead.
“We came out with a different energy than the past couple games and that was good to see,” Colman said. “Some different guys in there, stepping up, with an opportunity and making the most of it. It was nice to see a different attitude, different mentality coming into the game.”
Burbank’s defense seized on the early momentum and kept CV off the scoreboard in the first half, getting a major fourth down stop late in the second quarter. With the ball at the 14 yard line, Pehar threw to the end zone but the pass was broken up and nearly picked off by defensive back Kaze Gibbs.
“They were flying around, they were playing with passion. That’s what it’s about,” Colman said. “We had some injuries so we had some guys stepping up, some young guys getting their first real varsity opportunity and they made the most of it.”
But the Falcons finally broke through on the opening drive of the second half with their best possession of the game, going 71 yards in nine plays to even the score on a one-yard run from running back Matthew Watson. Pehar started the drive with three straight completions and finished it five for five with 47 passing yards.
“Hats off to Goss [Coach Gossard]. They always come out with some adjustments,” Colman said. “They came out, tossed the ball around a little bit, our secondary wasn’t quite prepared. Once we started trying to adjust, they went back to the run. So they caught us off balance a little bit.”
After Burbank’s ensuing drive fizzled out thanks to an intentional grounding penalty, CV once again got the ball back deep in its own territory. This time, Gossard leaned on his two running backs, DeLeon and Watson, to carry the load. They answered the call, and the drive ended with DeLeon, the returning CIF player of the year, shedding defenders on a 17-yard run to the end zone.
DeLeon finished with a game-high 136 total yards, evenly split between the air and the ground. He had 12 carries for 68 yards and six receptions for 68 yards. Watson finished with 13 carries for 70 yards and trucked a Burbank defender on his game-clinching first down run late in the fourth quarter, getting a big reaction from CV’s sidelines.
“Those two guys, they’re some of the most physical runners we’ve ever had here. I mean, they hit you,” Gossard said afterward. “When you have that physicality, that grinds a team down.”
Pehar, meanwhile, finished a 14 for 23 with 123 yards with zero turnovers or sacks. Unlike Araradian, he was rarely pressured or forced outside the pocket, and Gossard credited him for getting more of a feel for the game back after rough season debut.
Patrick Weinmann had four receptions for 23 yards, Remi Valdes had one reception for 22 yards and Carson Center had two receptions for 15 yards.
On the Burbank side, Pena led the way with three catches for 39 yards and also recorded a 15-yard run. Jagg Richer had four catches for 31 yards and Nick Franco had one catch for eight yards.
Crawford finished with 12 carries for 63 yards, and Anderson had eight carries for 30 yards.
Burbank played its next game against Muir at the Rose Bowl Stadium on April 9. Meanwhile CV hosted Pasadena on April 8.