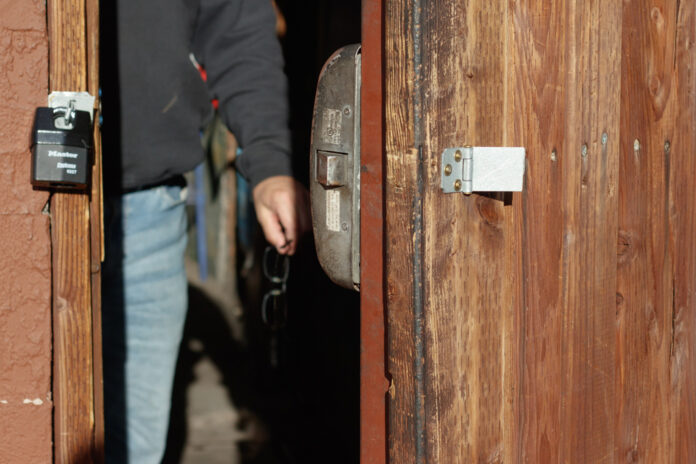 The Burbank City Council sued Tinhorn Flats Saloon and Grill for operating without a permit in February. The restaurant launched a GoFundMe to help afford legal fees. Last week, Burbank Water and Power cut power to the facility. Supporters brought generators. This week, the city padlocked the doors. The eatery cut the latch.
The ongoing feud between the city of Burbank and Tinhorn Flats has escalated recently, with the latter circumventing officials’ attempts to enforce local and county rulings made against the restaurant for defying health orders and operating without the required permits.

The restaurant’s actions have galvanized pandemic deniers and those who see COVID-19 restrictions as tyrannical. They have also infuriated other community members who are worried that Tinhorn Flats could contribute to the spread of the virus and are frustrated that more isn’t being done to close it.
City officials have urged the public to remain patient. Burbank’s enforcement options are limited by the will of a judge, whose decisions have so far favored the city. The city turned off Tinhorn Flats’ power last Saturday, and padlocked the restaurant’s doors on Wednesday morning.
But after restaurant workers cut the latch on the side door to allow customers in, the city manager and city attorney ordered the local police and fire departments to unlock the front door as well, citing the potential safety hazard.
“It’s shameful that Tinhorn Flats allowed people within their establishment while the front doors were still locked and in violation of the judge’s orders,” Eric Garcia, the Burbank fire chief, said in a news release. “If a fire had broken out during this event, people could have become trapped inside, which may have resulted in the loss of life.”
Another court hearing is scheduled for March 26, when the city will request a preliminary injunction to keep Tinhorn Flats from operating. If the request is granted and the restaurant stays open, the owner, Beret Lepejian, could be found in contempt of court.
“In reality, we don’t have the ability to effect immediate change and force Tinhorn Flats to close,” said Amy Albano, Burbank city attorney, in the release. “This is why we are going back to court.”

‘I WON’T GO QUIETLY’
It has taken months for Burbank representatives to arrive at the point of power shutoffs and padlocks. Tinhorn Flats reopened its outdoor patio in December despite county and state restrictions. Now, despite owing tens of thousands of dollars in citations, having his health and local permits revoked and facing opposition from multiple levels of government, Lepejian remains as determined as ever.
The restaurateur has repeatedly downplayed the pandemic’s death toll and called the health orders he violated “illegal.” Though he said in December that he was reopening his patio both to help his business survive and to oppose what he saw as government overreach, he told the Leader this week that the fight “at this point [is] totally personal.”
“I won’t go quietly,” he added.
Lepejian, who said he has been in Thailand since August 2019, explained he feels fueled by the criticisms of his detractors.
He has also been inspired by the enthusiasm of his supporters. Though initially reluctant to accept donations, Lepejian allowed his son and Tinhorn Flats co-owner Lucas to launch a GoFundMe to pay his existing lawyers and hire another one. It has raised more than $35,000 since March 2.
Baret Lepejian said his children sometimes wonder how they’re going to keep the business running for another day. He tells them to “keep up the fight” for everyone who is rooting for them.
“We can’t let them down,” Lepejian explained.

SUPPORTERS RALLY
Indeed, on Wednesday evening, St. Patrick’s Day, the restaurant showed little outward sign that it was facing opposition from the city — aside from a set of padlocks that remained on its front doors. A few people set up a merchandise table on an adjacent street, selling T-shirts and taping pro-Donald Trump flags to a street pole. A sign touting a number of conspiracy theories was set up nearby.
At Tinhorn Flats’ outdoor patio — where the controversy was centered about three months ago — patrons dined around tables. They paid in cash or through an app since the city’s actions had kept the credit card reader from working.
Indoors, maskless customers chatted in relative darkness, the room illuminated by dim lights powered by a generator. Some swapped falsehoods as they sipped beers. The government was lying about all of it, a few said: the pandemic, the January assault on the U.S. Capitol. But they, united by a defiant saloon, knew the truth.
Speakers rallied the patrons, encouraging them to sign one petition to recall Gov. Gavin Newsom and another in support of Tinhorn Flats. The barroom echoed with chants: “USA! USA!”
That night, with people still inside, police and fire personnel removed the locks from the front door. They had been up for less than a day.