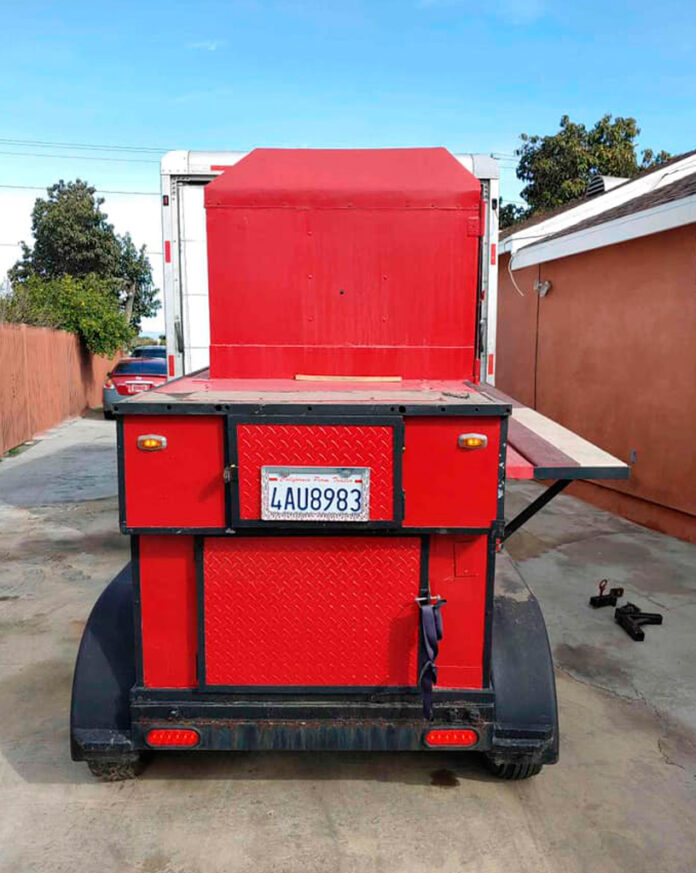 The owner of a local taco restaurant said he’s “excited” after learning that a truck and trailer belonging to the eatery were recovered this week shortly after it was stolen.
A Pablito’s Tacos employee noticed that the truck and attached trailer, which were parked near North Kenwood Street and Burbank Boulevard, were missing on Wednesday morning, said restaurant owner Danny Rodriguez. The vehicles, which police believe were stolen sometime between Sunday and Tuesday, were found later that day in North Hollywood, Rodriguez said.
The truck is used for catering, Rodriguez explained, and the restaurant had outfitted the trailer with a custom wood fire oven in preparation for placing pizza on the menu. He estimates it would have taken about $35,000 to replace everything.
“We’re excited, because we were already looking at what the cost would be to replace all of that,” Rodriguez said.

The restaurant’s truck, a box-shaped vehicle similar to a U-Haul truck, was also stolen about two years ago, though it was later recovered. Rodriguez, who reported the disappearance to the police, added that there were no cameras surveilling the area where the truck was parked this week. He believes whoever took the vehicles abandoned them after realizing how quickly they had been reported stolen, and because the trailer’s size and bright red color makes it difficult to hide.
He encourages community members to remain vigilant against thefts and break-ins, and to “keep an eye out for any suspicious behavior around there, and just work together as neighbors.”
“And, of course, support us by ordering tacos,” he added with a chuckle.
Pablito’s Tacos has enjoyed some local fame, appearing on multiple “Los Angeles’ best tacos” lists, such as from L.A. Taco and Eater Los Angeles, since it started about five years ago in Burbank as a Peruvian food truck.
Since the restaurant already served many of its customers via takeout before COVID-19 forced widespread closures, Rodriguez said Pablito’s Tacos is “probably one of the few that actually has thrived during the pandemic.
“Where a lot of restaurants have closed down, we’ve picked up a lot of their clientele.”
Because the missing truck was used for catering, its loss would have affected the restaurant’s ability to serve private events and other functions, he added, which provide another important source of income. But now that both the truck and trailer have been returned, he plans to launch the restaurant’s new menu: “Neo-Mex pizza.”
“Now, we’re full steam ahead,” the owner added.