If there’s anything Bradley Whitford has learned after starring in supportive roles for two critically acclaimed movies that have earned Oscar nominations for best picture this year, it’s that the only surety of show business is its unpredictability.
And while the accolades are still hard to wrap his head around, after some 33 years in the industry, the Emmy Award-winning actor and Pasadena resident has learned to survive on the adoration and rejection that Hollywood dishes out, sometimes simultaneously.
“It’s a lifetime of ‘I love you, I hate you, you’re amazing, who are you, come here, go away,’” Whitford said during a recent telephone interview, noting that when “Get Out” was being released in February of last year, “The Post” hadn’t even been given the green light yet. “It’s just surreal. You really don’t know when you are making a movie, what’s going to happen to it. It’s very hard to make a movie work.”
But — perhaps with an unquantified amount of luck, he claims — here he is, in the Oscar lineup with two movies that are polar opposites.
Whitford has a starring supportive role in “The Post,” directed and produced by Steven Spielberg, and alongside acting legends Meryl Streep and Tom Hanks. A historical political drama based on real-life events, the movie depicts the first female publisher of a major American newspaper, Katharine Graham, and the events leading up to the publishing of the Pentagon Papers, classified documents about the involvement of the U.S. government in the Vietnam War during the presidency of Richard Nixon, who tried to suppress the free press. Whitford plays Arthur Parsons, a grim lawyer who advises Graham and the Washington Post editor Ben Bradlee, played by Tom Hanks, against publishing the documents showing the government knew it was waging an unwinnable war.
“There was really a sense of mission to it — we wanted to get it out as soon as possible, because we are living in a time when the First Amendment is under threat,” said Whitford, noting that to work with pros like Spielberg, Streep and Hanks, it was more than a little intimidating on the first take.
“The first time you do a take with Meryl Streep and Spielberg is staring down the barrel of a lens at you … does the Zen get sucked right out of you? Yes!” said Whitford, chuckling, adding that the three icons are “wonderful, supportive, nice and kind human beings … they’re nice to everybody, to the teamster’s kids, everybody. That was really striking to me.”

Whitford said the three also bring a great sense of joy to their acting process.
“Tom Hanks is like a kid in the candy store,” he said, also noting the similarities between Spielberg and “Get Out” director Jordan Peele. “Both Spielberg and Jordan have this infinite sense of glee; they’re like little kids who are so excited to be at work, it feels like you’re at recess with them.”
Although “The Post” was almost a guaranteed Oscar runner with the headliner stars and dramatic material about a lesser-known fight for freedom of the press, “Get Out” has been a complete sleeper hit, one of the few movies to achieve a 99% rating on Rotten Tomatoes. Written and directed by Peele, the movie has been classified as a comedic horror film, although most critics have said it defies any one category. 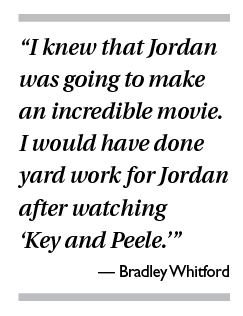 The film was passed over at the Golden Globes for the best film in a comedy/musical category, due largely to speculation that the movie’s genre was hard to peg for the awards show. Even Peele tweeted, perhaps humorously: “‘Get Out’ is a documentary.”
The movie stars Daniel Kaluuya as Chris, a black man who uncovers a disturbing secret when he meets the family of his white girlfriend (Allison Williams). Whitford plays the white patriarch father, an eerily charming yet boding character, who might give the most foreshadowing in the film. Whitford gets to use his winsome smile to a tee in the part, showing all his pearly whites, but with sinister eyes and an otherwise unsmiling face.
The film has been widely praised by critics, in great part for Peele’s smart, original script and directing. It was chosen by the “National Board of Review,” the American Film Institute, and “Time” magazine as one of the top 10 films of the year. It’s also been a huge box office success, grossing $255 million on a $4.5 million budget, and Peele has given credit for the success to the average moviegoer, people who have told other people “Go see this movie.”
“I thought we were making a really hip, quirky art-house movie — no one knew we would really hit a nerve. It’s a $4 million movie, a guy directing for the first time, no one had the remotest clue this would be so incredible,” Whitford said. “No one knew he would chuck a cultural grenade; the movie Jordan did hit a reptilian brain stem.”

The movie touches on sensitive race-relation topics such as interracial dating and cultural appropriation. Peele has said he always had a passion for horror movies, and was intrigued that as a filmmaker, he could bring disturbing topics to light in a way he couldn’t do in other genres.
Whitford, meanwhile, had long been a fan of Peele since watching his comedic skits on “Key and Peele,” and had been trying to get on that show through every resource, even asking a mutual hair and makeup artist to help get him an audience.
Before he was ultimately given the “Get Out” script to read, Whitford said he already knew he would sign on.
“I knew that Jordan was going to make an incredible movie. I would have done yard work for Jordan after watching ‘Key and Peele,’” he said.
Then he read the script.
“I had never read a script like this, ever. It’s like you’re running straight into a conversation that is impossible to have … Jordan knows the power of the conversation, and it’s even a better way to have the conversation — he is making the audience live the experience,” he recounted.
While he’ll be rooting for both movies at the Oscars, he has a penchant for championing the underdog.
“What Jordan did is the most extraordinary thing I have seen anybody do with a story in my career, and the degree of difficulty with which he did that is unprecedented. For him to get rewarded as much as he deserves would be phenomenal,” he said.
He then segued, laughing, and compared award shows to dog shows.
“It’s so hard, everyone in that room has had the creative experience of a lifetime, and then somebody comes out and says the dachshund is better than the poodle. Well, I want Jordan to be the dachshund.”
For Whitford, he’s enjoying his time in the sun. After so many years in the business, his profile took off after achieving fame on “The West Wing,” in which he played the trusted White House Deputy Chief of Staff Josh Lyman for seven seasons. It was the role of a lifetime, and one Whitford looks back on with love.
A self-proclaimed political junkie and activist, Whitford (during this interview), was taking a break from watching the news from his home in Pasadena, a town he says reminds him of his youth in Wisconsin: “There’s something oddly Midwestern about it here.”

Every now and again he’d walk back toward the TV, catching bits of Special Counsel Robert Mueller indicting 13 Russian nationals and three Russian entities for alleged interference in the 2016 presidential election.
He reflected on the frenetic pace of shooting the West Wing.
“Part of the joy of being on that show was all day every day, you’re talking politics, often with well-versed political advisers,” he said. “Politics are important for people to understand, it’s how people create their moral vision.”
He’ll soon get to take a spin on another politically charged project, a show he absolutely loves:
“I get to do ‘The Handmaid’s Tale’!” he said, almost giddy. “I am a commander ‘Under His Eye.’ Just the fact that I get to be a part of a show that’s great is exciting to me.”
Whitford will also produce and collaborate with Liz Hannah (who co-wrote “The Post”) and Amy Pascal to create a miniseries for Amazon on the Mercury 13, a secret project referring to 13 American women who, as part of a privately funded program, underwent some of the same physiological screening tests as the astronauts selected by NASA in 1959 for Project Mercury.
Having done six projects just since 2016, Whitford reiterates how thankful he feels in doing what he loves, and for his more recent successes.
“It’s just very, very, very lucky to be able to do the variety of stuff that I’ve been able to do,” he said.