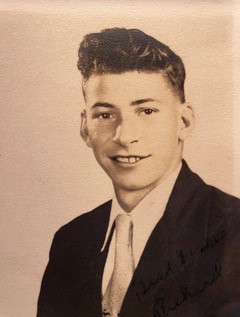 Richard Engh, a resident of Gold Beach, Oregon passed away October 6, 2022, in Laguna Beach, California. He was 88.

Richard was the youngest child of Bertha and Henry Engh, born May 4, 1934, in Chaseburg, Wisconsin. He graduated from Westby High School in 1952.

He entered the United States Marine Corps after high school and received an honorable discharge in 1962.

He married Audrey LaVonne Hink in Burbank, California, July 6, 1957. They moved to Santa Ana, California, where he served at El Toro Marine Base. In 1960 they moved to Burbank, where he worked with his brother Harley in the roofing business; later co-founding Viking Insulation Company in 1966. He retired early 2000’s and in 2003 moved to Gold Beach, Oregon. They built their dream home where the Rogue River meets the sea.

Richard was an avid outdoorsman who loved fishing, hunting, camping and the Green Bay Packers. He always enjoyed singing, most recently in his home church choir. Bethany Lutheran, in Gold Beach. He loved his children, grandchildren, his many nieces, nephews and all of his extended family. He was an animal lover in every way and took great pleasure in his later years watching the river run, and he never missed an episode of “The Virginian.”

Richard was preceded in death by his parents, siblings, daughter Cindy (Engh) Chandler, and his wife Audrey (Hink) Engh.

Funeral services will be held at 11 a.m. on Friday, October 28, 2022, at Coon Valley Lutheran Church, 1005 Central Avenue, Coon Valley, WI 54623; with a viewing from 9 a.m.-11 a.m. A luncheon reception will follow the service. Interment will be at Bethany Church Cemetery in Esofea, Wisconsin.