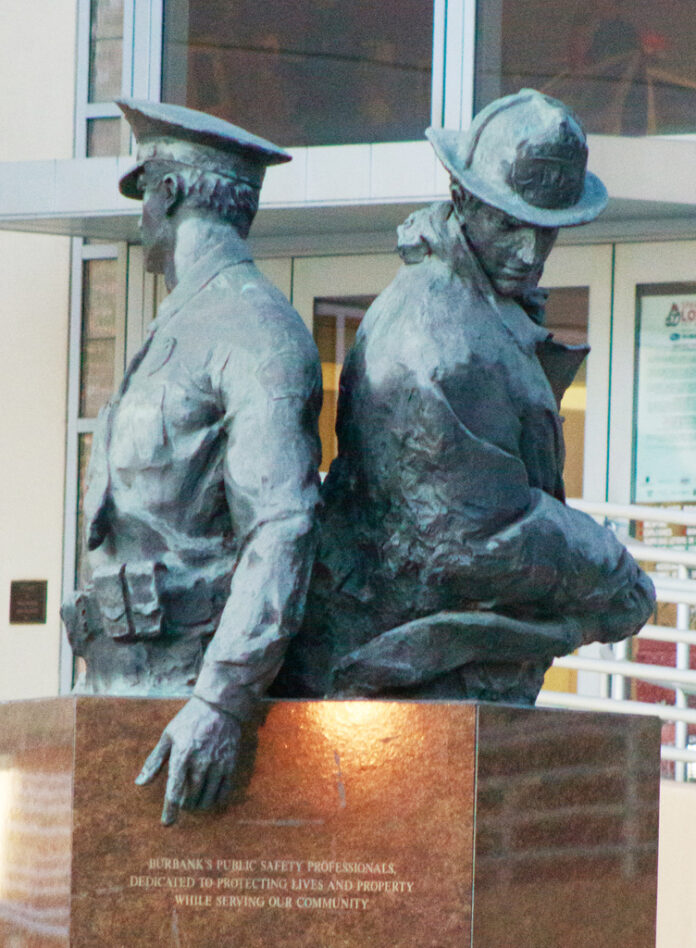 As the state and county continue to roll out vaccines to health care workers and elderly residents, Burbank’s police union president says he’s disappointed that law enforcement has been left waiting.
Burbank Police Department personnel were scheduled to receive vaccines last Wednesday and Thursday, Feb. 3-4, according to Lt. J.J. Pugilisi, president of the Burbank Police Officers’ Association. But as the dates approached, he said, Los Angeles County shifted gears, pushing back police departments’ reception of the vaccines to allow more residents ages 65 and older to get them.
Though fire departments in the county were included in an earlier wave of vaccinations — Burbank Fire Department personnel received their second doses last week — because they often respond to COVID-19 related emergencies and other health calls, Pugilisi pointed out that police officers often have to be physically close to residents.

“We’re extremely disappointed by the county’s decision to delay vaccinations for first responders,” Pugilisi said. “When the majority of the community was asked to stay at home to reduce their exposure, [our] officers on the street didn’t have the choice. … And now that a vaccine’s available and there’s the opportunity to offer protection to us, it just seems that it’s not much of a priority for the county to do that.”
L.A. County, like the rest of California, continues to struggle with a scarcity of vaccines compared with demand. A spokesperson from the county’s public health department said that the groups currently being vaccinated — health care workers, residents and staff at long-term care facilities and people aged 65 and older — account for about 2.2 million people in L.A. County, which has an estimated population of 10 million.
“While vaccination efforts are moving more slowly than any of us would like, it is important to note that we have made much progress over the past several weeks and we are currently ahead of other large [United States] jurisdictions in our efforts,” the statement read.
The spokesperson added that state vaccination guidelines place law enforcement and emergency responders, along with food, agriculture and education workers, in Phase 1B, Tier 1. People in those groups could start being vaccinated in “a couple of weeks” if vaccinations become available, according to the spokesperson.
The L.A. County Department of Public Health estimates there are 154,000 law enforcement and emergency responders in the county.
Out of the BPD’s 233 sworn and non-sworn personnel, 20 workers have tested positive for COVID-19, according to the city’s communication manager Simone McFarland. Only one officer was hospitalized, later returning to work.
Pugilisi, who tested positive for the disease and has since recovered, pointed out that many officers have died from the coronavirus. The Washington Post reported in 2020 that COVID-19 had caused more law enforcement deaths that year than all other causes combined. Many of those deaths were of personnel working in correctional facilities.
“That just amplifies the importance of trying to get all of those folks vaccinated,” Pugilisi said, explaining that a department vaccination rollout would include both sworn and non-sworn personnel, and would prioritize workers in order of their contact with the public.
Sgt. Emil Brimway, a spokesman for the BPD, said that most police departments in the county are also finding themselves without vaccines, adding, “The Department continues to work with [L.A. County Department of Public health] to ensure [Burbank Police] Department members who wish to receive the vaccine receive the vaccine as soon as possible.”
It’s not just L.A. County law enforcement personnel who have struggled to get vaccines. News reports from San Diego County have relayed the frustration felt by many sheriffs and police chiefs calling for immediate vaccinations.
Some law enforcement workers in Orange County can receive vaccines, while all such personnel in Riverside County and San Bernardino can do so.