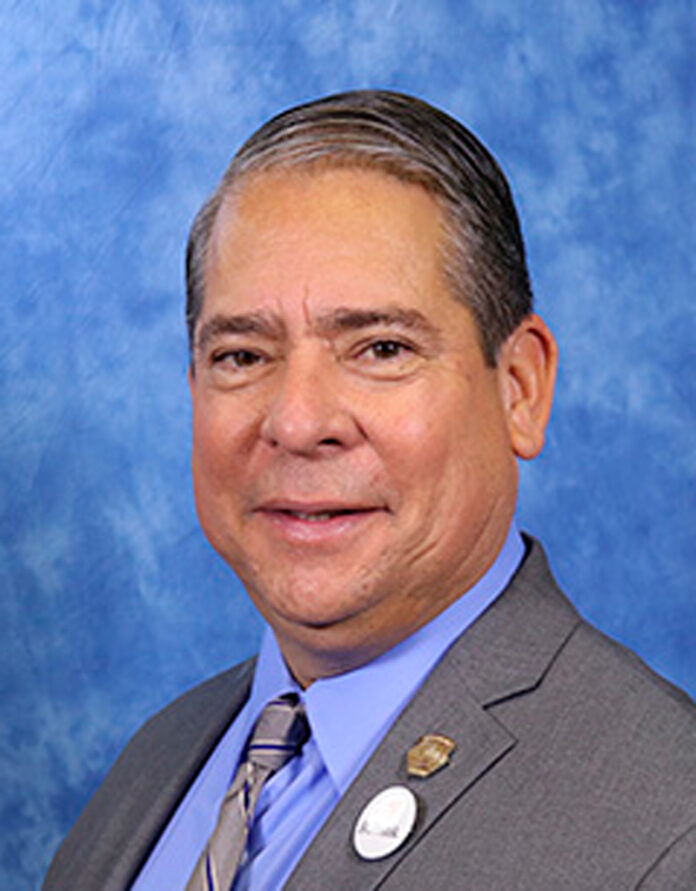 City Councilman Bob Frutos was appointed this week by his fellow members to serve as Burbank’s mayor for the next year, with Jess Talamantes to hold the position of vice mayor.
Frutos, who was Burbank’s mayor from 2015-2016 and has been a council member since 2013, was quickly appointed by his peers — who include newcomers Konstantine Anthony and Nick Schultz — during the council’s annual reorganization meeting on Monday. Frutos was nominated for mayor by Talamantes, who was in turn nominated for the vice mayor position by Anthony.
Frutos, a former Los Angeles police officer and Burbank police commissioner, has served for the past year as vice mayor. Former Mayor Sharon Springer, whom he replaced, remains a City Council member.
“I know the road ahead of us will be the most difficult in modern history to serve on any council,” Frutos said Monday. “Like so many other cities across our nation, we’re just beginning to see the economic devastation of a sort that we really haven’t seen since the Great Depression. … Our top priority will be maintaining the fiscal health of our city and to continue to work on the economic recovery of our city.”

Monday’s meeting also featured a tribute to Springer for her work as mayor and to departing council members Timothy Murphy and Emily Gabel-Luddy. Murphy, an attorney who served on the council from 1989-1993 and was later appointed to the panel after the death of Mayor Will Rogers in 2018, made an unsuccessful bid to keep his position during this year’s election. Gabel-Luddy announced earlier this year that she would not pursue reelection.

SPRINGER RECALLS TERM
In her opening remarks, Springer pointed to the recently signed city anti-racism statement and several development projects as important milestones in her time as mayor.
“I’m just very grateful for my mayoral term,” said Springer, whose time as one of the city’s highest-ranking officials was marked by the advent of the coronavirus pandemic. “It’s been a very interesting term, and I really appreciate all of your support … and for all the hard work, for keeping your chins up, everybody, and taking it as it comes and not quitting, never ever.”
As mayor, Springer often addressed the Burbank community through recorded COVID-19 updates and pushed to promote public transportation within the city. She also served on the Southern San Fernando Valley Airplane Noise Task Force, which sought to address noise issues from the Hollywood Burbank and Los Angeles World Airports.
“You were shortchanged as a mayor, because you didn’t do some of the ceremonial activities that other mayors before you got to,” Frutos said. “But you persevered and you put priority [on] people, and for that, the four of us want to say ‘thank you.’ It’s been our honor to serve under you.”

MURPHY, GABEL-LUDDY SAY GOODBYE
Both Murphy and Gabel-Luddy spoke in the council chambers one last time to wish their colleagues well, as they would not be proceeding to the panel’s Tuesday meeting.
Frutos said that Murphy helped advise him when the former joined the council, and Murphy’s peers thanked him for the experience he brought to the panel following Rogers’ death some years later. Murphy’s final address was brief but emotional.
“I said on the night that I spoke to you [and was appointed] that you needed to have fun, you need to work together — and that’s so important,” he said. “And it was true with us. We all had our say. I don’t think there were any weaknesses, but there were a lot of strengths. … I was proud to do it.”
Council members also praised Gabel-Luddy — who was elected to City Council in 2011, served as Burbank’s mayor from 2013-2014 and concluded Rogers’ mayoral term after his death — for her thoughtfulness and initiatives. In her last speech, Gabel-Luddy went through a lengthy list of the city’s accomplishments during her time with the council, also expressing gratitude to residents.
“I want to thank the community, because you always reminded us when you thought we were off base, and in many cases, we listened to you,” she said. “We did our best to see that your needs were met.”

NEW MEMBERS SWORN IN
New council members Schultz and Anthony were also sworn into office on Monday, with both thanking their predecessors for their service.
Their more veteran peers congratulated them on their successful campaigns, as did a number of state and federal officials who attended the meeting virtually, and both Schultz and Anthony appeared eager to get to work.
Attendees included state Assemblywoman Laura Friedman, state Sen. Anthony Portantino, Congressman Brad Sherman and representatives from the offices of Congressman Adam Schiff and Los Angeles County Supervisor Kathryn Barger. Several of them specifically addressed the newcomers, encouraging them to serve their communities well.
“There’s nothing better than local government, nothing more immediate, nothing more special,” Portantino said.