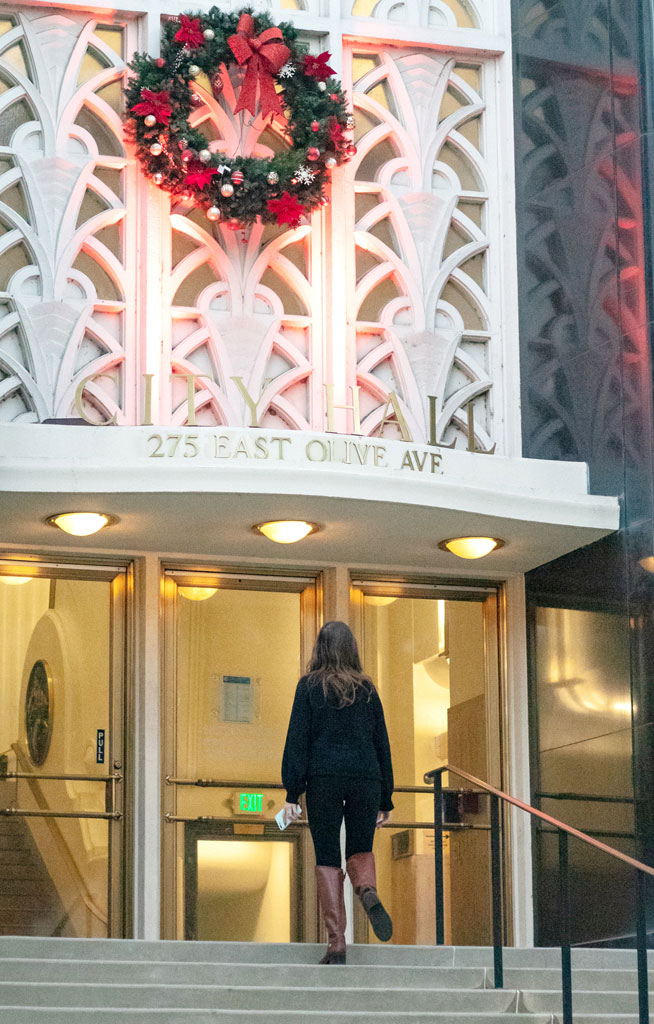 The Burbank City Council appeared confident this week that the municipality would find ways to address a projected General Fund deficit caused by the pandemic, though it is not yet clear what a budgetary response would look like.
The city does have some time to figure out its next steps; as staff members reminded the council on Tuesday, the recurring General Fund balance is not expected to be in the red until about June 2022, that fiscal year’s end. At that point, recurring expenses are projected to surpass revenues by $4.1 million.
The annual deficit, according to city projections, will then shrink to $1.9 million in fiscal year 2022-23 and $2.8 in 2023-24, before widening again to $4.3 million in 2024-2025.
“Even though the five-year projections show recurring deficits,” Councilman Jess Talamantes said during this week’s meeting, “it’s not 10s and 15s and 20s [of millions].” He added that it was up to city staff members to determine a budgetary course of action.
Councilman Tim Murphy also pointed out that other cities have announced layoffs due to the economic impacts of the coronavirus.

“Considering what happened in March, this is amazing,” he said. “I feel pretty good tonight.”
This fiscal year, burdened by the full weight of the COVID-19 pandemic and an $8.8 million contribution to city employees’ pensions, was projected to have a recurring deficit at $10.8 million, but a variety of savings measures were or are expected to be implemented.
The hiring freeze of dozens of vacant city positions, for instance, saved more than $3.75 million, according to a report submitted to the council. The department whose hiring freeze saved the most money was the Burbank Police Department, with more than $1 million of its payroll budget remaining in the city’s coffers. More than $540,000 of that amount was due to the suspension of the crossing guard program.
This fiscal year’s General Fund was also somewhat boosted by lower-than-expected spending last fiscal year, which ended on June 30. Assistant Financial Services Director Jennifer Becker explained Tuesday that all of the city’s departments had used less than the General Fund appropriations they had been given, with the Community Development Department spending only 71.3% of the $14.3 million it had been allocated.
On average, the departments used only 91.7% of their 2019-20 appropriations, thanks in part to hiring freezes and event cancellations. Including expenses carried over from previous years, the city spent nearly 97% of its General Fund budget for that fiscal year.
Sales tax revenue has taken a heavy hit during the pandemic, dropping 13.9% compared to the first quarter of the 2019-20 fiscal year. Property tax revenue was expected to be more stable, according to Becker, and assessed values had increased by 4.9% this fiscal year. Combined, the two tax sources normally account for more than 55% of General Fund revenue.
The city had more than $28 million in working capital reserves — 15% of its General Fund — and more than $9 million in emergency reserves — 5% of its General Fund — by the end of last fiscal year. However, Becker told council members that the city hasn’t dipped into them in at least a decade.
Working capital reserves, she said, are meant to be used if the city’s revenues are eliminated entirely, while its emergency reserve funds are designed to be taken from after an earthquake or similar disaster. The funds would also eventually need to be replenished after being used.
“You can certainly say that a pandemic qualifies as an emergency,” Becker said, “but [drawing on reserves] should be a move of last resort. That shouldn’t be the first place you go to.”

CITY WORKERS GET RAISES
Though the pandemic has hurt the municipal budget, many of Burbank’s city workers will receive retroactive wage increases, according to an agreement approved by the council.
A staff report submitted to the council notes that, because members of the Burbank City Employees’ Association — a local union for more than 700 city workers — make on average 6% below the July 2020 market average, the employees should receive raises. The first salary increase, 3%, is retroactively effective as of Aug. 23, 2020, while another 1% salary increase will go into effect on July 1, 2021.
Though the staff report admits that the increases don’t quite match BCEA workers’ pay with the market rate, citing the financial difficulty caused by the pandemic, it adds that the city’s goal is still to reach that level.
Employees who are making minimum wage are not affected by the agreement; they will instead receive raises that meet state requirements.
The approved changes to the agreement between the city and the union will cost the former more than $5 million over two years, though the staff report states that there are enough funds in the budget to absorb the expense.