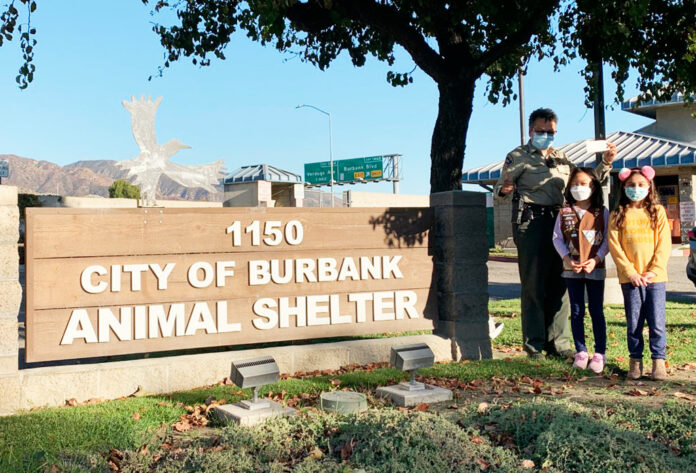 A group of local Girl Scouts recently donated $300 to the Burbank Animal Shelter’s nonprofit arm, a gift that was matched — so the shelter received a total of $600.
The 2nd- and 3rd-graders of Burbank-based Girl Scout Troop 00006 gave part of the revenue from their pre-pandemic cookie sales and fall fundraisers to the shelter for Giving Tuesday. The Volunteers of the Burbank Animal Shelter, the nonprofit auxiliary to the facility, matched the donation as part of its end-of-year fundraising campaign.
The money is not designated for a specific program, according to Lissette Rojo, the shelter’s outreach coordinator, but the VBAS usually helps the shelter cover expenses that its budget doesn’t, such as special surgeries or supplies for the kitten foster program.
Normally, Rojo added, the Boy Scout and Girl Scout troops the shelter works with are invited tour the building, with many of the youngsters volunteering to paint murals or perform other projects. The girls of Troop 00006 had planned on donating $100 to the shelter earlier this year, but both parties decided to wait since the pandemic made in-person tours risky.

“We thought, ‘Maybe we can wait it out,’ but obviously it has just been dragging,” Rojo said.
The postponement did have one advantage: The troop had time in the fall to collect another $200 for the shelter. Vanessa Tevault and Nan Paik, troop leaders whose daughters are in the group, said they realized that the pandemic’s prevention of in-person tours would last longer than they initially thought.
Like the Scouts’ meetings, the tour around the animal shelter was held virtually. But that didn’t seem to stop the girls from getting excited about the showcase, Rojo said.
“Christmas is coming up, so their questions were very specific,” she added, jokingly apologizing to parents who might be asked about a new pet for a holiday gift. “‘What about that cat with the green eyes?’ ‘How old is that one?’”
Tevault also admitted that, particularly since the 12 girls in Troop 00006 are now attending school remotely, many are feeling frustrated that they’re not able to see each other.
“They’re pretty fatigued, to be honest,” Tevault said. “But I think they’re glad we’re doing something instead of nothing.”
This is the first time Troop 00006 has partnered with the shelter, Tevault and Paik added, and the scouts, who vote on which organizations to donate to, seemed happy to share their resources. Earlier this year, the troop also gave part of the proceeds from their cookie sales to a homeless shelter.
“The girls, they just constantly talk about wanting to help people and animals,” Paik said. “So we just take their lead on that.”