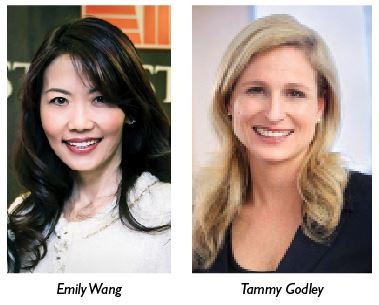 Tammy Godley and Emily Wang have been elected to Muse/ique’s board, it has been announced.
“Tammy and Emily are two dynamic women who profoundly inspire me,” said Muse/ique Artistic Director Rachael Worby. “In each of their professional lives and in their volunteer work, they are addressing vital issues of equity and access in our community. Their values are well aligned with those of Muse/ique and I know we will benefit from our collaboration with these deservedly well-respected leaders.”
Godley is a litigation partner with Munger, Tolles & Olson, and handles complex business litigation disputes and specializes in entertainment litigation and advising. She serves as counsel to the major studios, networks, recording companies and music publishers, including Turner Broadcasting, Cartoon Network, Warner Bros., Sony Pictures, Warner Music Group and more. Godley has been recognized as a leading lawyer by Chambers USA. In 2012, she received a California Lawyer Attorneys of the Year Award for her representation of Warner Bros. in its highly publicized dispute with Charlie Sheen.
She serves on the Leadership Council of the Los Angeles County Bar Association’s Counsel for Justice, as vice president of the Pasadena Educational Foundation, and is a past president of the Armory Center for the Arts. She graduated from UCLA with a double major in English and political science, obtained a master’s degree in English from Cal State Northridge and taught in South Central Los Angeles before going to law school at USC Gould School of Law.
Wang is senior vice president, director of Marketing and Community Development at East West Bank, one of the largest independent banks headquartered in Southern California. East West Bank has been ranked in the top 15 of “America’s 100 Best Banks” by Forbes for six consecutive years (2010-2015). Wang has extensive experience in brand building and management, content and digital marketing and strategic marketing programs. She also serves as president of the East West Bank Foundation.
Outside the bank, Wang has served on the Marketing Cabinet of United Way Greater Los Angeles, the Executive Advisory Council of Asian Americans Advancing Justice–Los Angeles, the Community Advisory Council of the Asian Youth Center, the Advisory Council of the Center for Asian Americans United for Self-Empowerment and the board of the Anti-Defamation League Southern California Chapter. In 2016, she was awarded the Community Championship Award by the Center for Asian Americans United for Self-Empowerment (CAUSE), and the Community Leadership Award by the California Journal for Filipino Americans. In 2010, Wang was awarded the prestigious Deborah Award by the Anti-Defamation League.
Wang, who was born in Taiwan, holds a B.A. in journalism from National Cheng-Chi University in Taiwan and a master’s in mass communications from Texas Tech University. She’s a Kellogg Executive Scholar of Kellogg School of Management at Northwestern University.

Shouldn’t Churches Have a Place for Dogs?